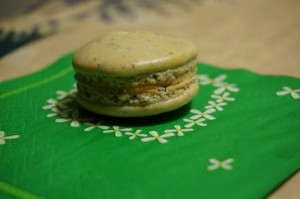 My first challenge is to make that dainty, delightful but notoriously capricious French delicacy, the macaron. Talk about being thrown in at the deep end!
I did a lot of research beforehand and found one fellow blogger particularly helpful: Ann Reardon of howtocookthat. I used her Easy French Macarons Recipe.

None the less, I ran into trouble…
My first batch was far too runny, making the macarons spread into all sorts of inelegant shapes. This was due to the fact that I used a fairly deep measuring jug to whisk the egg whites, meaning that although they were stiff on top, the beaters hadn’t reached quite to the bottom, so that the lower part of the mixture wasn’t firm enough. A silly mistake!
Another lesson I learned is that the macarons bleach considerably in the oven. What started out as a pretty lilac was nothing but a light brown by the time they were baked. Also, most of my first batch cracked. And they didn’t have the little ridge, or “feet” they’re supposed to have at the bottom. So pretty much everything that could go wrong went wrong. I’m not even sure they’d qualify as macarons. Having said that, they were almondy and gooey and absolutely delicious!

Here is the shameful evidence: 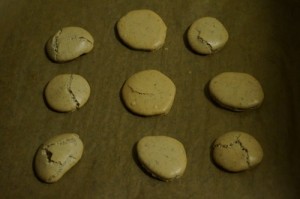 My second attempt rendered better results, but still nothing to write home about. Third time lucky, this time I actually managed to create something that could pass as a macraon. They kept their shape, had little feet and a beautiful texture. Actually, the texture still improved with time and they were a lot nicer on the second and third day than on the first. But I’m still having issues with colour and cracking. The colour is probably an easy one to solve, I was using the standard gel colours you can buy in the baking section of any supermarket, and they’re obviously just not good enough. I have now bought food colouring from a proper cake decorating shop and it’s a lot stronger.
The cracking is more of an issue. Banging the baking tray with the macarons on the counter several times before putting them in the oven is supposed to prevent them form cracking. It would be difficult to whack them down any harder than I did without breaking either the kitchen counter or the baking tray and to do it more often than I did without bringing a hord of complaining neighbours to my door, and yet quite a few of them still cracked. Maybe I have to experiment more with temperature…

Another area that still needs more exploration is the filling of the macaron. The recipes I’ve found all seem to be for chocolate ganches or buttercream and I’ve tried both. I filled my first and second batch with a white chocolate ganache and the third with lemon buttercream – both tasted delicious, but not like a typical macaron. I’m looking for more of a light, soft, creamy texture – any ideas, fellow bakers?

Having now probably put you off the little buggers for life, let me quickly add that they are gorgeous little buggers, even when they don’t look perfect. 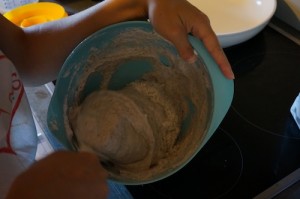 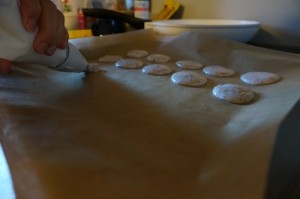 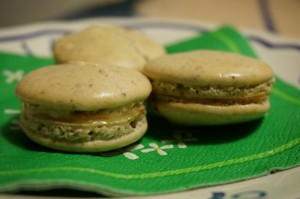 A few days ago, when I found myself regretting that there was enough home-made chocolate gateau and freshly baked bread to last us another few days and I therefore had no excuse to don my apron and get baking, I realised it was time to put my obsession into words. Partly, to give myself something baking-related to do when I’m not actually baking, but I hope it will also become a place for kindred bakers to come to when they’ve run out of eggs on a Sunday afternoon. A bakers anonymous, if you like. Except that it’s not about abstaining. Quite the contrary.